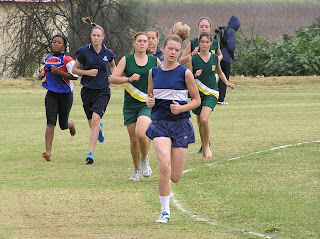 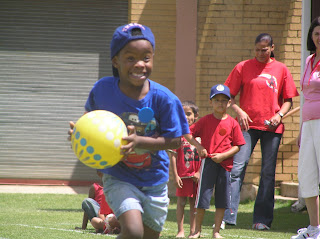 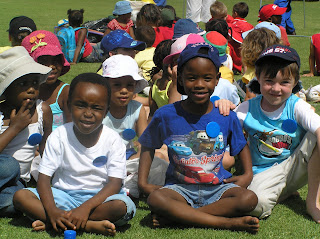 Wow! We have been so busy lately! School has been hectic, especially this term for my daughter, Ruth Anne.

Before I begin, I must tell a story. The first time my husband, Kurt, and I came to South Africa, we came for the "All Africa Games" in 1999. Basically, the "All Africa Games" is pre-Olympics for the continent of Africa. We stayed with a family whose son was in the Olympics in Atlanta and was competing in the "All Africa Games." The first night with the family, I asked them what their son did in the Olympics. The mom replied, "He's an athlete."
"Ok." I thought. "Should I ask, 'In what sport?'" But, as I contemplated asking, she continued, "He runs the 4oo." "Oh!" Light dawned...an athlete runs...that must mean he is in Track & Field!

Well...I learned that lesson well. When we moved to South Africa, Ruth Anne entered grade 2 (same as in the States). The first term...school is divided into 4 terms with 2-4 weeks break in between...the children were taken to the "athletics" stadium for a fun day. Parents were invited to attend. So, Kurt and I went. Ruth Anne ran the 60m sprint and came in 2nd place. We were excited for her. The next week, we received a notice that she had made the athletics team! And, she has been on the team ever since.
She's spent her years running the short-distance sprints and added long jump a few years ago. But, this year, she found out that she could run longer distances and loved it! They had an in-school competition and she won the 800m race by a good margin. So, she began running 800m along with 100m and long jump.
So, this term has been full of athletics practice everyday until 3, netball practice one day a week and horseback riding! Ruth Anne's last competition against several high schools, she won the 800m (pictured).

Josh also had "Sports Day" at his school. He ran several fun races. It was a joy to watch all the kids have fun running and cheering. The parents even got to run. Kurt's race and my race are NOT pictured on this blog - for obvious reasons!

Now, this first term is coming to an end. Our kids will get a three week break. I'm sure we will continue to be busy...but maybe we can sleep in a little bit later for the next three weeks! Yea!!

Janna Kay
I grew up in Texas. I thought I would never leave Texas, but found myself in Virginia and North Carolina after getting married. Then, I thought we would move closer to family in Texas. Oh no! We now live in South Africa! We love it! God has an awesome way of working! 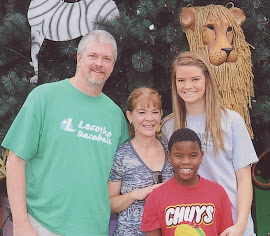